When Sweden’s King Ordered a Clinical Trial of Coffee on Prisoners to the Death. 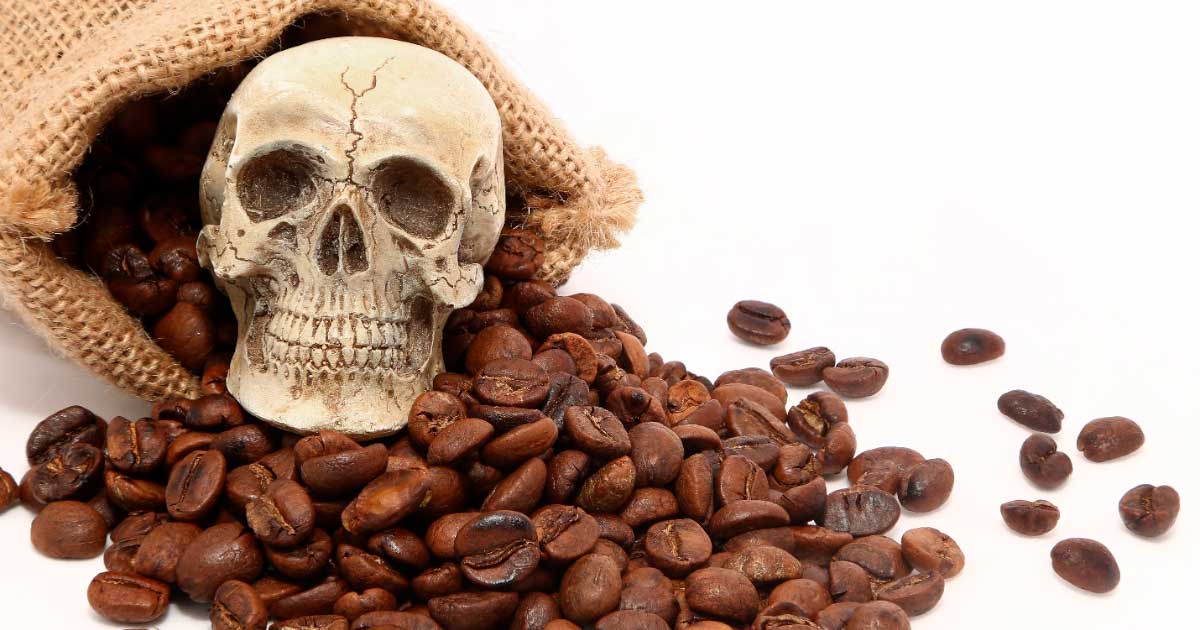 Between Dunkin Donuts and Starbucks, coffee is everywhere. If you’re a coffee lover, you may have wondered about how coffee came to be throughout history. In early times, however, some people interested in coffee were uncertain about the delicious drink. This was certainly the case for King Gustav III of Sweden, who was suspicious of the banned drink and commanded two prisoners to drink it in a long-term coffee experiment that continued long after his death.

Coffee was mostly met with eagerness as it made its way from Constantinople’s early coffee house culture to the capitals of Europe. Afterall, it was the “first” European energy drink! However, Sweden and some religious movements were very skeptical and even suspicious of this beverage from the land of the Crusades. The Swedes were the only people to create a coffee-health experiment but why, given that they love the drink like crazy today?

From the Early Coffee Kingdom of Yemen to Eager Europe

The true origins of coffee are a bit of a legend. According to the oldest story, a goatherder named Kaldi discovered coffee in a forest in ancient Ethiopia. He found some interesting berries from one of the trees that he fed to his goats. After noticing how energetic the goats became, he reported the berries to the local monastery.

The abbot of the monastery made a drink with the berries and found that it kept him awake all night. From there, news about the magical berry drink spread quickly because its energetic properties were super desirable and profitable.

Outside of the legend, the earliest record of coffee can be traced back to Yemen at the southern end of the Arabian Peninsula in the 15th century. Coffee was first grown in plantations in Yemen and traded with other regions including Egypt, Turkey, and Persia. Coffee was an extremely popular trade commodity. It was so popular, in fact, that before long the world’s first coffee houses started popping up all over Constantinople.

Called qahveh khaneh , early coffee houses were not just for drinking coffee, but were also for socializing, similar to today’s coffee shops. These coffee houses were known for entertaining the public with music, performers, and news updates. In some regions, coffee houses were nicknamed “Schools of the Wise” because of the information shared between parties at them. They were ultimately an excellent place to gather at that wasn’t a town center or a random shop. 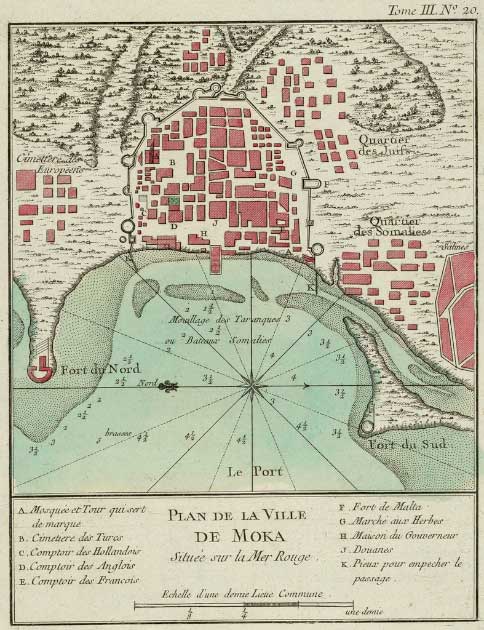 The settlement of Moka or Mocha, Yemen, as drawn by French artist Jacques-Nicolas Bellin, was the first port to be closely identified with coffee fortunes. This map shows the various districts of Mocha at its peak in the 18th century. (Jacques-Nicolas Bellin / Public domain )

From Turkey, news of the special dark stimulating beverage spread to Europe and developed into distinctive coffee cultures in Austria and Italy. European travelers returning from Turkey in the 17th century brought coffee home with them. Coffee houses were quickly built across the European continent and became havens of socialization and communication. “Schools of the Wise” were instead called “Penny Universities” as a cup of coffee only cost a penny in England.

Though the new energy drink quickly gained popularity there were also places where it was viewed with suspicion! Soon after coffee was introduced in Europe, religious groups began to condemn coffee as “the bitter invention of Satan.” The clergy even condemned coffee in the early 17th century, and the debate became so great that the Pope was asked for his opinion. After trying the beverage for the first time, he found it so delicious he gave it his immediate stamp of approval.

Once coffee was approved religiously, it became so common it quickly became the most popular breakfast beverage in the region. Because coffee energized those who drank coffee in the morning, it influenced workers to drink it regularly to help them work more effectively. By the late 17th century, over 300 coffee houses existed in London alone. As the coffee craze died out, many of these coffee houses became other successful businesses in the region, such as insurance companies or bookstores.

At this point, coffee was imported to the United States, where it competed heavily with tea to become the most popular beverage. After the Boston Tea Party, coffee easily won the competition. Because of its demand, other regions including Indonesia, Central America, and South America began cultivating coffee to join the trade, the trees of which all came from a single seedling from Amsterdam. 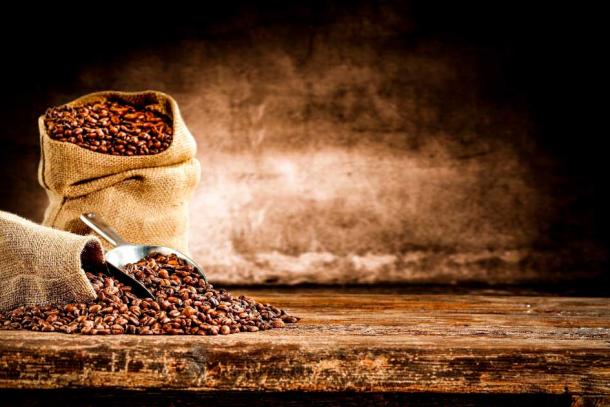 When news of coffee reached Sweden, King Gustav III was suspicious to the extent that he tested the drink out on two prisoners, an experiment that continued after the king’s death! Others in Sweden worried that coffee would kill the beer and wine markets. ( magdal3na / Adobe Stock)

One of the countries in Europe that took a great dislike to the coffee craze was Sweden. Though many countries overturned bans on coffee once the Pope approved of it, Sweden was not one of them. Because of their fear that coffee would destroy the beer and wine market, Swedish officials decided to keep the aromatic beverage banned. Though they did this through (ineffective) legislation, their real goal was to convince Swedes that coffee was dangerous to drink. If they could convince their people of its danger, they wouldn’t have to fight so hard to keep the wine and beer industries thriving.

It’s unclear whether Swedish officials truly believed coffee was a danger physically, or if they simply wanted to spin that tale to change the public’s perception of coffee. Many people think it’s a bit of both, especially for King Gustav III. For someone with great investment in the beer and wine industry, watching the entire country’s sudden shift to coffee must have been at least somewhat concerning.

King Gustav III decided to prove coffee’s danger by performing what is believed to be the first clinical trials performed regarding coffee consumption. Of course, he wouldn’t perform the trial on himself. Instead, he gathered two prisoners to become his lab rats. The prisoners were twin brothers, both of whom were in prison and sentenced to death for their crimes. In exchange for a reduction in their sentences to life in prison, Gustav III offered for them to partake in his lifelong experiment. Both brothers agreed.

Unfortunately, Gustav III never got to see the results of his experiment. He was shot during a masquerade ball in 1792, the injuries from which killed him several days later. After many years, even both doctors assigned to the prisoners died before the men. It’s said that the coffee-drinking brother outlived all of them, with the exception of his own brother. The coffee-drinker lived to be 83, when the average Swedish life expectancy at the time was only 38. If anything, Gustav III’s experiment did the opposite of what he’d hoped.

Nowadays, Sweden is one of the top 10 coffee-consuming countries in the world. Their love of coffee simply could not be stopped, even in the face of legislation and high taxes. Luckily, they don’t have to worry about either one of those anymore. They even now have a term, “Fika,” which is used to describe an extended coffee break from work where Swedes congregate with their friends.

Nowadays, coffee is as popular as ever. You can’t leave your house without driving by at least one coffee shop in any direction! And let’s face it, we all have our favorite drink from Starbucks. We should probably thank Kaldi and the pope for it the next time we order!